It is not a new problem, but it is worsening. Physician-scientists are disappearing.

In a word, I consider hospitals only as the entrance to scientific medicine; they are the first field of observation which a physician enters; but the true sanctuary of medical science is a laboratory; only there can he seek explanations of life in the normal and pathological states by means of experimental analysis. - Claude Bernard, 1865

Peter Safar, the creator of the first intensive care unit (ICU) in the United States, father of cardiopulmonary resuscitation, pioneer of the modern ambulance design, and three-time nominee for the Nobel Prize, repeatedly delivered a very simple message: physician-scientists are in danger of extinction.1

In the last 30 years, the problem has only worsened: the 2014 report by the NIH Physician-Scientist Workforce Working Group showed that physician-scientists are consistently decreasing as a percentage of the medical workforce, fewer physicians apply for federal funding each year, and many are near retirement.2 Further, the paucity of physician-scientists in anesthesiology is particularly prevalent when compared to other specialties.3 What would a future look like with no physician-scientists? What would be the consequences of losing the physician-scientist workforce? Let’s review their role: physicians involved in science and academic medicine are essential protagonists in making discoveries and translating them into clinical practice. They can unify and interpret worlds with different languages and dynamics: clinical medicine, clinical research, and science. Physician-scientists are uniquely qualified to apply clinical expertise and training to formulate clinically relevant hypotheses, testing them at the pre-clinical and clinical level.4,5 In essence, physician-scientists can bridge the challenging gap between basic science knowledge, clinical research, and medical treatments, a role which cannot be easily fulfilled either by full-time clinicians or PhD scientists.5,6

Data show that physician-scientists trained through MD-PhD/Medical Scientist Training Program programs are (1) more likely to apply for NIH training awards than their MD-only counterparts, (2) more likely to go from a training award to an independent research award, and (3) more likely to receive NIH grants and re-apply after failed R01 applications. However, despite the important contributions of physician scientists, MD-PhD graduates represent only 3% of all medical graduates each year.7 For non-MD-PhD graduates, additional considerations including lack of access to formal mentorship and training, burdensome financial commitments, and inadequate institutional support of time and resources limit physicians from pursuing research after starting clinical practice.

The reasons behind the physician-scientist crisis are complex, however, historical records underscore the policy of grant restrictions for research training in the 1960’s as a significant trigger: the Nixon Administration deemed research training as “personal equity that ought to be financed by the recipient.”5,8 Furthermore, in 1974, the National Research Act imposed serious restrictions, such as a payback provision for those who did not continue in research after training, which ultimately discouraged the physician-scientist pathway even among talented and motivated students and trainees. In summary, the limited number of MD-PhD graduates, the uncertainty of federal and institutional support, the extended curriculum from sub-specialization, and the burden of medical school loans coupled with the allure of more lucrative practice options have all impeded the growth of research among physicians.5,9

How could this concerning trend be reversed? We don’t have a definitive answer, but we know for a fact that tomorrow’s medical care depends on today’s medical research. Accordingly, early recruitment and retention of physician-scientist trainees, formal research pathways during training, and departmental and institutional support for those pursuing research will all be critical pillars in reversing the current trend. The responsibilities and burdens of a combined clinician and scientist career can be overwhelming, often causing promising physician-scientists to abandon academic medicine at a very early stage in their careers and gravitate exclusively towards clinical care.

It is imperative that we support and cultivate the talents of scientific inquiry and pursuit of knowledge among physician-scientists to bring change, innovation, and the hope of translational research.

When should we start? As Peter Safar said, “If it's worth doing, it's got to be done right now.” 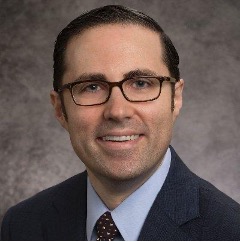 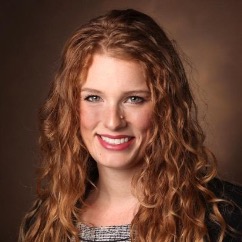 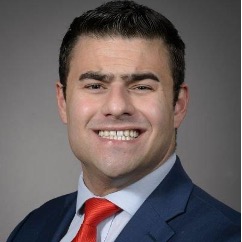 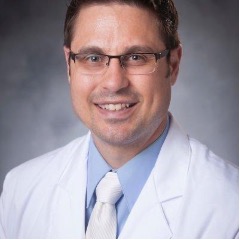 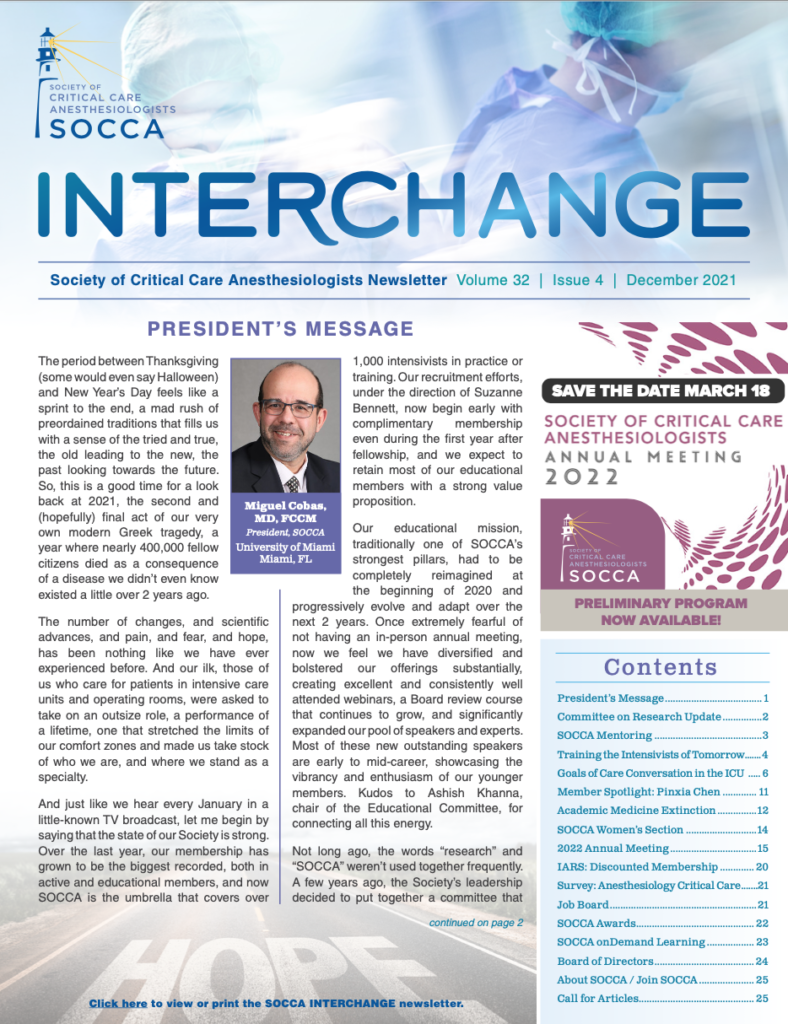 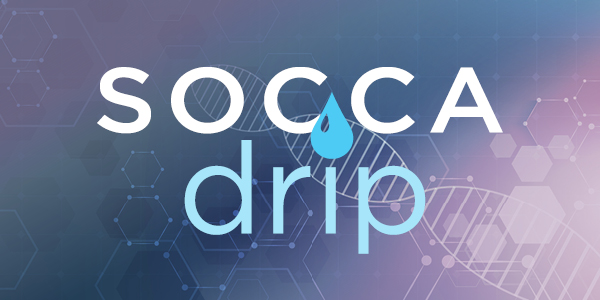 SOCCA Women’s Section: Survey
We at SOCCA would like to invite you to join our initiative to form a women’s group within the ACCM community. As a first step, we ask that you express your interest in our group by participating in its development via a brief survey: https://socca.org/socca-womens-section/survey/
All ideas are welcome! 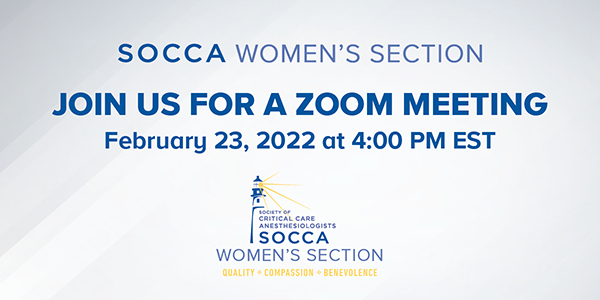 Please join us for a SOCCA Women’s Section Zoom Meeting.
When: February 23, 2022 | 4:00 PM Eastern Time
Please register in advance for this meeting: Registration Link
(After registering, you will receive a confirmation email containing information about joining the meeting.)

Did you make any changes in 2021? It’s time to update your SOCCA demographic profile and / or renew your membership. Keep your SOCCA experience seamless & don’t miss out on any updates & member benefits. Visit: buff.ly/3sPMG6j 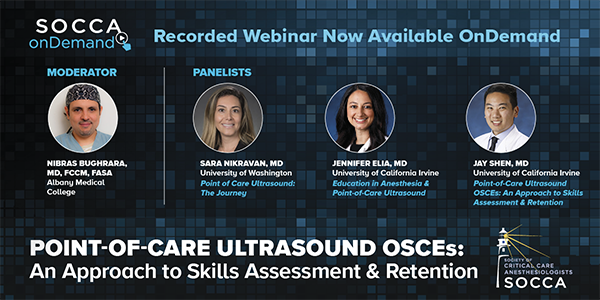 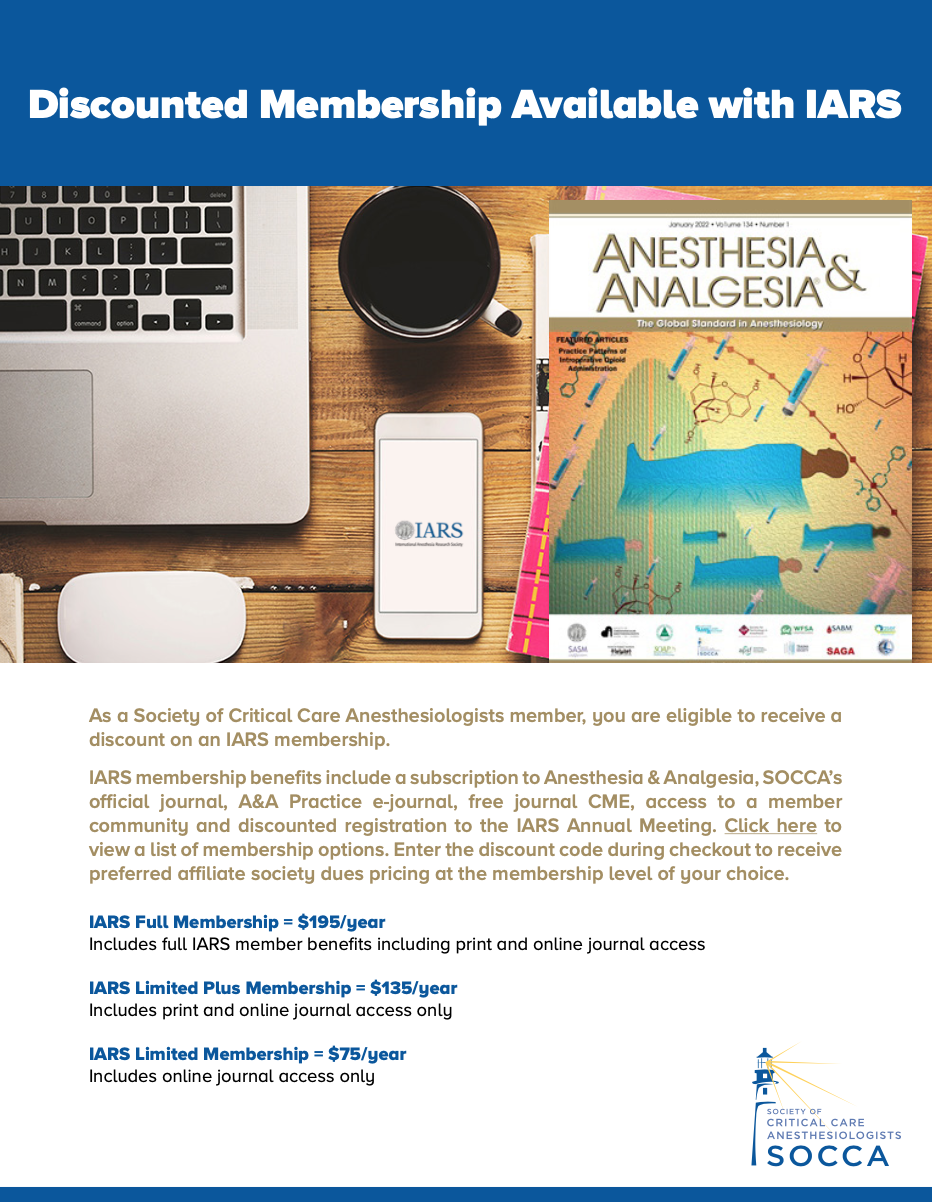 As a SOCCA member, you are eligible to receive a discount on an IARS membership. IARS membership benefits include a subscription to Anesthesia & Analgesia, SOCCA’s official journal, A&A Practice e-journal, free journal CME, access to a member community and discounted registration to the IARS Annual Meeting. Click here to view a list of membership options. 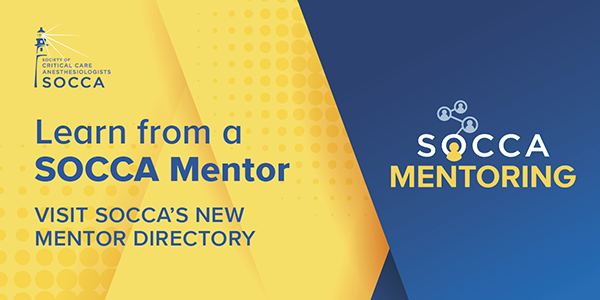 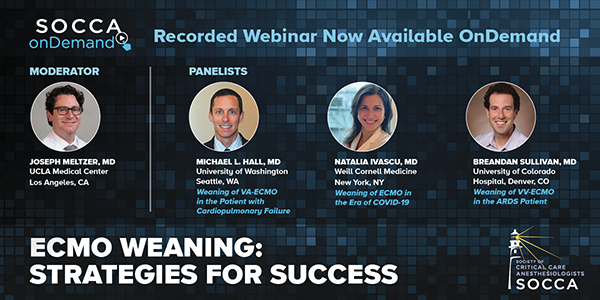 If you attended the “ECMO Weaning: Strategies for Success” Webinar on November 18, please learn more about requesting CME credit.

Learn more about how SOCCA acknowledged the invaluable contributions of its female intensivists during September’s “Women in Medicine Month.”